The History of Forging Techniques

Forging, at a basic level, is the technique of shaping metal pieces using heat and force, often with a hammer, into parts for machines, tools and weapons.  The art of forging and metalworking is found in human culture as early as 4,500 B.C.  In the early years of forging, settlements in Mesopotamia were known to use copper to create hand tools and weapons for survival.  Small wood burning fires and rocks were used to heat up the metal before pounding it into its desired shaped.  Soon after other metals were discovered, leading the way for stronger weapons and tools. By 1,000 B.C., forging techniques and metals had spread throughout Europe and the rest of the old world. 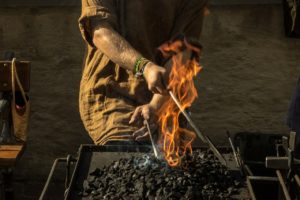 During 1,200-1,000 B.C. as forging grew to be an essential part of human civilization, the term smith or blacksmith emerged. During this period, Smith’s in the West forged wrought iron using charcoal fires and bellows to increase the heat of the fire and a hammer to bend, cut and shape the metal into arrowheads, knives, scrapers, tools and even artwork. By this point, forging and metal production had spread throughout China and became a part of everyday life.

During the iron-age, bloomery furnaces rapidly replaced open charcoal fires as an effective way to forge. These furnaces or pits were made of clay and stone and were designed to be heat-resistant, built with pipes referred to as tuyeres.  These tuyeres were used to force air into the furnace using bellows to heat up the charcoal and increase furnace temperatures.

The Discovery of Water Power

The forging and blacksmithing industry basically remained the same until the discovery of water power. During the 13th century, water power was discovered as an effective way to power bloomeries. Waterwheels were used to power the bellows, allowing for bigger and hotter bloomery furnaces with an improvement in forging production. The last known bloomery was used in Spain until the early 19th century. 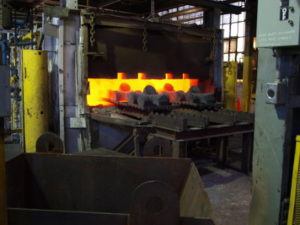 The 19th century marked the turning point in the forging industry, leading the way for what is known as modern day forging techniques.  James Hall Nasmyth (19 August 1808 – 7 May 1890) was a Scottish engineer, artist, and inventor and is credited for the development of the steam hammer receiving a patent in June 1842.  Steam powered forging hammers emerged during this time and are still used today along with hydraulic and electric powered units.

Many forging processes can now be automated with computers, streamlining the process and making for quick and precise parts for industries like aerospace and transportation.  A process that was developed thousands of years ago, forging remains one of the most effective ways to produce metal parts for critical applications.