Canton Drop Forge is the primary supplier of the Tail Rotor Hub for the Apache helicopter? Forged from 6-4 titanium, Canton Drop Forge has supplied this critical component for over the past 30-years. You've come to the right place for top-quality aerospace parts so that you get the very best in safety and durability. Get a quote on forgings for rotorcraft and rotary-wing aircraft, like for the Apache tail rotor hub, today from Canton Drop Forge! 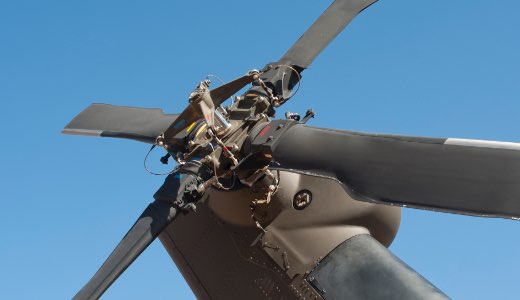 Get Your Custom Helicopter Rotor Parts from Canton Drop Forge

The tail rotor counters the torque effect created by the main rotor. Without them the helicopter would spin out of control. A tail rotor hub works to counter the rotation of the main rotor hub and prevents the helicopter from losing orientation. It also rotates small wings called blades. These blades vary in pitch as a way to differentiate the amount of thrust they produce. With this in mind, a pilot can use the tail rotor blade as a rudder for steering by varying the pitch of its blades.

The tail rotor and the systems that provide power and control for it are considered critically important for safe flight. As with many parts on a helicopter, the tail rotor, its transmission, and many parts in the drive system are often life-limited, meaning they are arbitrarily replaced after a certain number of flight hours, regardless of condition.

As with all forms of aerospace, each part affects the others. Dealing with a faulty tail rotor hub puts safety and flight stability at a major risk. The solution is simple: a top-quality forged helicopter tail rotor hub created with you in mind.

If you’re searching for a helicopter tail rotor hub or other parts for aerospace forging, look no further than Canton Drop Forge. We strive to provide a wide selection of products that are all tested and inspected to guarantee unmatched strength and quality.

Choose a company who believes in top quality and customer satisfaction. Contact us for your free quote today!