Steam and gas turbine engines play a huge role in power generation. Canton Drop Forge also plays a large part in the forging of these components, powering air transportation and power plants across the country. 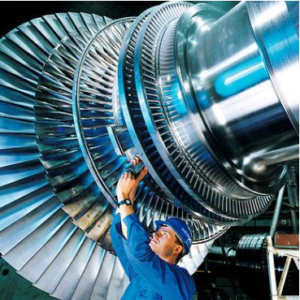 A steam turbine utilizes thermal energy from pressurized steam to rotate a shaft that is typically connected to an electrical generator. Roughly 90% of all electricity generation in the United States is produced from steam turbines. The energy to produce the steam is normally from coal, nuclear or from a combined-cycle configuration with a gas turbine.

In a gas turbine, fuel is ignited so the combustion generates a high-temperature flow. Typically, air is compressed in a compressor section. Fuel is then added and ignited, rotating a shaft connected to devices such as an electric generator.  Gas turbines are used to power aircraft, trains, ships, electrical generators, APUs and tanks.

Gas turbines used for power generation differ from aeronautical designs in that the frames, bearings and blading are of heavier construction.  Efficiency can be improved with combined-cycle units where waste heat from the turbine is recovered and used to power a conventional steam turbine.  Now, over 50% of electricity in the US is produced from natural gas combined-cycle plants.  Gas turbines are also often used to supply electric power during peak, or unscheduled, demand. But, in areas with a shortage of base-load or with low fuel costs, a gas turbine power plant may regularly operate most hours of the day.

Industrial gas turbines can be used solely for mechanical drive.  These engines are connected directly or via a gearbox to either a pump or compressor assembly. The majority of installations are used within the oil and gas industries.  Oil and Gas platforms use these to drive compressors to inject gas into the wells to force oil up via another bore, or to compress the gas for transportation. They’re also often used to provide power for the platform.

Canton Drop Forge supplies compressor wheels, disc and shafts as well a gas turbine blades. Please contact us for more information and to get a quote.