Canton Drop Forge has decided to remove the 100,000-gallon aerial water tower due to its age and condition. The iconic tower, with its red Canton logo has been seen by many as they travel across Route 30. The tank, which supplies water for steam generation and process water for the plant has been in operation for over 60 years.

Undergoing many repairs and rebuilds over the years, the tank was determined to be past its useful life. The decision was made to replace the tank with a ground level tank of the same size. CDF contracted with International Tank Service in Lima, Ohio to construct and install the 100,000-gallon replacement tank, followed by the final coating, painting, and installation of supply lines, which were completed in April 2016.

Eslich Wrecking Company is performing the work for CDF, which includes removal of a large girder crane in the same location as the tower. This crane was used to service a rail siding that was removed from CDF many years ago and has not been in operation for quite some time. The space where both of these structures reside will be repurposed to improve traffic flow at the facility and for better-organized storage.

I am sure the employees of Canton Drop Forge, both past and present, will certainly miss seeing this landmark of our company as they come to work or travel across Route 30. 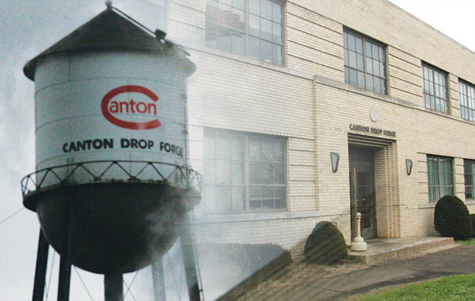